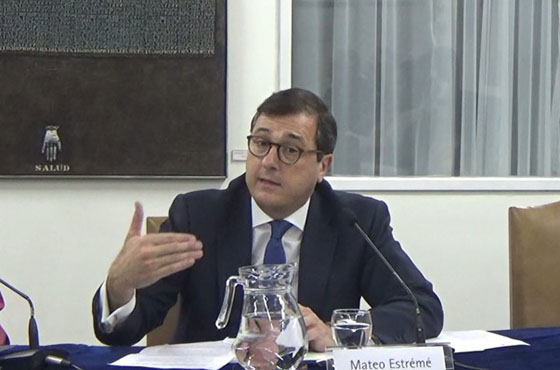 Academic session in charge of Mateo Estrémé, organized by the Environment and Human Development Studying Committee

Mateo Estrémé, Director of National Organization for the Argentinian Foreign Affairs Ministry, put in light that the introduction of those points in the agenda was a direct consequence of the basic consensus obtained thanks to Multilateralism.

For the UN Development program (UNDP) the definition of human development implies multidimensional conceptualization of the development. This organization is in charge of producing annual reports analyzing countries development situation. But Estrémé pointed the difficulties of measuring through quantitative statistics a phenomenon that is mainly qualitative. The constant perfection of those indicators and the dependence on data given willfully by countries generates more difficulties.

Although human development definition is not a universal consensus Mateo Estrémé presented the ODS concept. This one is based on three main questions. The first is the access to a minimal level of well-being mostly reflected by the GDP per capita indicator. The second is the life expectancy statistics. And the third point is the years of attendance at school and the possibility to follow courses at the University. For him that concept forces us to consider development as a political issue.

Estrémé referred to the Bundtland report elaborated by the UN in 1987 to explain the question of sustainable development. This first report was formostly unidimensional; it was focused on environmental issues. Some countries decided against this definition arguing that economic growth should be considered in an equally important measure. But the speaker highlighted that the main objective of the report was to show that development should take care of sustainable environmental issues because there will be no development if we have a wasteland. For that matter multilateralism has played an important part in promoting the sustainable development concept. The concept stated in 1987 converged to a way of making a better future for our societies. The social dimension and the economic one were added to the concept from the summit of Rio de Janeiro (1992). Furthermore the concept of sustainable development was more successful than the human development because it harmoniously incorporated those 3 dimensions, concluded Estrémé.

The concept of sustainable development in an agenda for the first time universal has been crystalized in the 2030 Agenda. The universality concept meant that every country is responsible even those with high income per capita. The speaker continued referring to inequality between developed countries and environmental questions as a problem that involves everybody. How to integrate the three dimensions of sustainable development in the 2030 Agenda was one of the main problems. One perspective advocated for responsibilities common but differentiated, the other, brought by developed countries, defended a superior paradigm. The last one stated that differences of development between countries did not matter because everybody was facing the same problem. Following this point, non developed countries argued that including a more political dimension involves taking away resources for economic growth.

Because the objectives were presented by countries for themselves even if they were directed to the entire Internacional community, the 2030 Agenda was described by Estrémé as aspirational. Countries are facing the problem of how implementing the multidimensionality of the agenda in their domestic policy, due to the nature of the 2030 Agenda. The adaptation on a national level faces some difficulties such as the lack of dialogue between ministries. To respond better to the state’s needs, the bureaucratic scheme of the UN is passing through a reform process. Those changes will allow a better integration of the agendas not only fot the countries but also for other multinational or regional organization. Furthermore the speaker explained that the 2030 Agenda would be implemented in a bottom-up movement. This is due to the monitoring system that states agreed on, implying the willful presentation of national informs. Informs allow each state to emphasize on the points that are more meaningful in regard of their situation and presenting the advances of the implementation. That system transforms an apparently aspirational agenda to an obligation for the countries, pointed Estremé.

Mateo EstréméHas a bachelor in Sociology of the University of Buenos Aires and has a bachelor in Political Sciences by the University of Belgrano. He graduated with the gold medal from the Instituto del Servicio Exterior de la Nación. He is now the Director of International Organizations of the Foreign Affairs Ministry. He has been general consul and General Director of the Centro de Promoción de la Argentina en Nueva York. Also he has been the Permanent Representant of the Argentinian Republic in the United Nations. Before, he was the Chief of staff of the Vice-Ministry of Foreign Affairs; he had this and other jobs inside and out of the Foreign Affairs Ministry