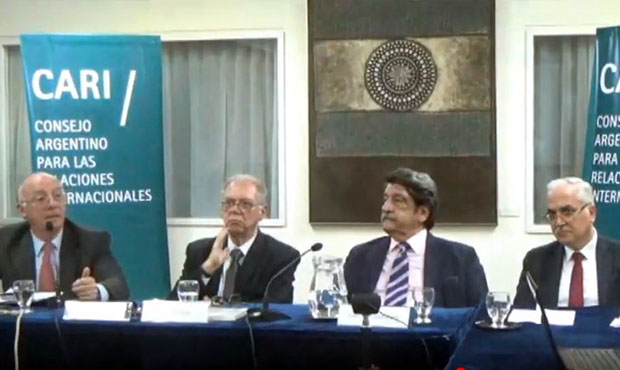 Academic session led by Juan José Santander and Julio Hang, organized jointly by the Committee on Áfrican Affairs, Arabian Countries and the Middle East and the Institute of International Security and Strategic Affairs

Mr. Santander and General Julio Hang spoke at CARI about the situation in the Syrian Arab Republic from its origins to the present, accounting for the multiplicity of entities involved in conflict and the conflicting interests regarding the territory. The presentation was also attended by the Syrian ambassador to Buenos Aires, Hamzeh Dawalibi.

Juan José Santander began his section by recounting the Middle East´s history, emphasizing the importance of the territory by the Mediterranean Sea due to its strategic relevance. Mr. Santander claimed that stability and governability in the Middle East should be attained in the name of peace and international security and their benefits.

He then detailed the creation of the Islamic State, headed by Abu Bakr al-Bagdad, whose objective has been the creation of a caliphate in old Omayyad territory and the return to its "previous splendor". The motives for choosing the Syrian territory were later specified as being due to the existence of repressed minorities (Shiites under the Sunnis) and the dispute over the veracity of Muhammad’s descendants.

Moreover, the characteristics of the Islamic religion were described, and the key division between Sunnis (Muslim majority) and Shiites (minority) in order to understand the Syrian conflict and ISIS and Al Qaeda as groups.

After explaining the defeat of the self-proclaimed Islamic State, Mr. Santander spoke about the history of the Al Assad family, who has been in power since the 70´s, and the way in which the Arab Spring unfolded due to civil groups demanding liberties and government participation. The harsh repression of said groups was considered to be a contributing factor to what would later become the civil war. He then stated that the decimation of ISIS was achieved by a coalition of forces headed by the United States, who operated under the idea of not sending troops but instead the support of all their resources.

Next, the speaker elaborated on the influence of Saudi Arabia on Syrian territory, which is based on the support to the regimen or the denial of such, and the situation of Sunni Muslims and Kurds in the civil war. The way in which Moscow, Teheran, Washington, Ankara and Jerusalem withdrew their support in fear of ISIS occupying their territory was also stated, and used as evidence that they are only serving their interests in the conflict.

In conclusion, Juan José Santander spoke about the necessity of stabilizing Syrian territory, which is a goal of many citizens, even of unrepresented minorities, and the ways in which the Syrian government will continue to consolidate, representing significant military defeat for the West.

General Julio Hang, on the other hand, centered his presentation on the objectives of the regional and international powers involved in the Syrian conflict, specifying these as economic or power balancing, and the current characteristics of the distribution of forces in the Syrian Arab Republic.

He claimed that the West doesn´t want to get involved in the future of Syria because there is no Sunnite alternative that can unify the rest of the groups, and this conflict makes it so that the only stable possibility for Syria is the continuation of the current government.

First, he referred to regional powers like Iran, whose Shiite minority is at play, Turkey, whose aspirations of regional influence are clear and who has used the Kurds as a unifying enemy, Saudi Arabia, with spiritual leadership to the Sunnis, and Israel, who pursues the avoidance of Syrian nuclear developments. Then, he addressed the United States and Russia, being the two main international powers at play in Syria, and highlighted the geopolitical importance of Syria as a Mediterranean nation in the interests of Washington as well as Moscow.

Juan José SantanderEx official of the National Foreign Service Institute, with a bachelor´s degree from the Universidad Nacional del Litoral; masters in Social Sciences, with a specialization on International Relations, by FLACSO

Julio HangDivision General. Head of the Institute of International Security and Strategic Affairs in CARI

"Article by Council on Foreign Relations on Syria post ISIS"

"Article on Foreign Affairs about Syria and its future"