A tribute to the career of Dr. Roberto Russell 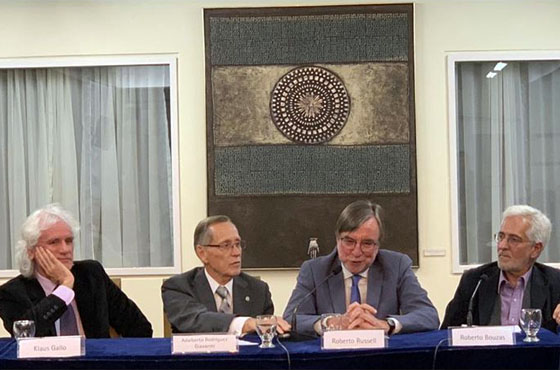 Event in honor of the academic and pedagogical contributions of Dr. Roberto Russell to the field of international relations, led by Roberto Bouzas y Klaus Gallo and organized by CARI

On Thursday May 23 of 2019, the Argentine Council for Internacional Relations (CARI) an event to pay homage to the academic Roberto Russel. Led by Klaus Gallo (Universidad Torcuato Di Tella) and Roberto Bouzas (CONICET and the Universidad de San Andrés), the panel began with opening remarks by Adalberto Rodríguez Giavarini, the president of CARI. The organization’s leader highlighted Russel’s influential academic work, comparing Russel’s contribution to Argentina’s academic community to that of an artist capable of "elevating us to a world of reason". He also thanked the honouree for his unquestionable role in helping to position Argentina on the global stage of international politics.

Next, Roberto Bouzas delivered a speech in which he thanked CARI for his invitation to the event and recognized Russell as a "pioneer and promoter of discipline in Argentina". Bouzas further underscored three essential facets of Russel’s academic life: not only are his academic works outstanding, but also noteworthy is his role as an expert in human resources and his efforts to strengthen Argentina’s academic institutions. In Bouzas’s own words, "more than descriptive analysis, Roberto’s academic works place analysis in a conceptual framework which enables more profound and robust feeling". That Russell’s analytical works remains practical and unstained by partisan ideologies is what, in Bouzas’s opinion, makes Russell’s work so exceptional. Moreover, Bouzas emphasized the remarkable quality of Russel’s career as a university professor and his steadfast commitment to expanding the community of Argentine specialists in international relations. Bouzas recognized Russel’s work to encourage the study of international relations in the nation’s universities and his efforts to create important organizations and specialized research centers in the field, like FLASCO. As a closing note, Bouzas celebrated Russel’s humility and kindness as characteristics of a person who will remain influential for years to come.

Later on in the event, Klaus Gallo spoke, beginning by remembering his relationship with Russel as his student at the Belgrano University and later as his colleague. Gallo highlighted Russel’s critical role in teaching about Latin America to Argentina’s youth, adding that the "classes Robert taught were greatly enriched by his descriptive and natural teaching style". He further noted that he had always "appreciated his great capacity to teach history, even though it was not his speciality". Gallo shared that Russell inspired gave him to pursue a career as a professor at the Universidad Torcuato Di Tella, sharing that Russel’s "affable and calm style" was his reference point when it came to teaching. Finally, Gallo recognized the contributions of the honouree to designing a curriculum in international studies at Torcuato Di Tella, stating that "it has been a privilege to be Roberto’s colleague".

Lastly, honouree Roberto Russell spoke, thanking the audience and expressing his deep emotion: "I feel like Manu Ginóbili at his retirement ceremony…and this isn’t even about my retirement, so I feel very thankful". Russell expressed appreciation for Adalberto Giavarini for the personal recognition he had just bestowed; he also thanked Bouzas and Gallo for their speeches, and the audience for their attendance. Russell mentioned that, in his life, fate had been in his favour and allowed him the opportunity to witness key moments in the development of the discipline of international relations, especially in Argentina. His great fortune, he added, also gave him the chance to work alongside excellent colleagues who opened doors for him in his career.

Russell recounted his beginning as a postgraduate instructor at the Universidad de Belgrano, when he was able to establish ties to influential figures in the academic world. Among these people was Luciano Tomassini, who Russell thanked for helping him to achieve his goal of expanding the study of international relations in Latin America. Tomassini’s support enabled the foundation of the Red de Relaciones Internacionales de América Latina (RIAL) in 1977 at the Universidad de Belgrano. Russell emphasized the success of the initiative and mentioned that his involvement allowed him to found his own publishing house years later. Further, Russell stressed the influence of Riordan Roett in his academic career, as Roett assisted in Russell’s admission to the School of Advanced International Studies (SAIS) as a Fulbright scholar.

Next, Russell spoke of his 20-year career at the Universidad de Buenos Aires, where he helped to create a political science department. Russell also mentioned his work at different universities across the country, adding that his career as a professor and later the Director of Academics at the Instituto de Servicio Exterior de la Nación (ISEN) was an important stage in his life.

With respect to his interest and involvement in the field of international relations, Russell highlighted the vast scope of the discipline. In his own words, "there is no better way to work seriously and produce something original in the field if one does not specialize". He identified two realms of international relations: one which deals broadly with the international sphere and political leaders, and another which tackles theoretical and structural challenges. Russell positions himself within this second category, and specifically defined his speciality as the study of "the nucleus of basic issues of international relations". His research on Latin America, he stated, was not just about "knowing", but also about "influencing".

World politics are so complex and there is no theory which sufficiently helps us to understand this moment. But what one must do is work with the wide array of tools which the discipline now offers us, and to take strategies from other disciplines as well

Russell cited a quote by Henry Bull, which holds that "to look for conclusions and present them as solutions or practical advice corrupts the study of international politics, which is an intellectual activity and not a practical one. It is better to recognize that we are in the dark when it comes to knowledge of future world politics and how we should be engaged with it". Departing from this line of reasoning, Russell argued that "today we have enough theoretical and empirical elements to give political recommendations", and that to develop policy prescriptions was the central aim of his work. Recognizing the many challenges in identifying causal mechanisms, Russell explained that "world politics are so complex and there is no theory which sufficiently helps us to understand this moment. But what one must do is work with the wide array of tools which the discipline now offers us, and to take strategies from other disciplines as well", in order to think "with total open-mindedness".

To conclude, Russell defined himself as a "hopeful realist". He explained that the contemporary world presents a triumph of realism; however, it is important to recognize that other traditions of thought don’t give "hope for the possibility of a better world". From Russell’s perspective, the global progress we are seeing has its roots in structural forces which are driving states toward greater international cooperation. Hopeful realism, he argued, offers a lens through which to view the challenges confronting Argentina since the 19th century: building the state, achieving sustained economic growth, greatly reducing poverty levels, and reversing the international decline of the country.

In his closing remarks, Russell thanked his family and friends for attending the tribute and expressed his gratitude for the support and love which they offer him daily.