Experiences in the Positioning of the Sustainable Development Goals in Argentine Cities: Advances and Challenges 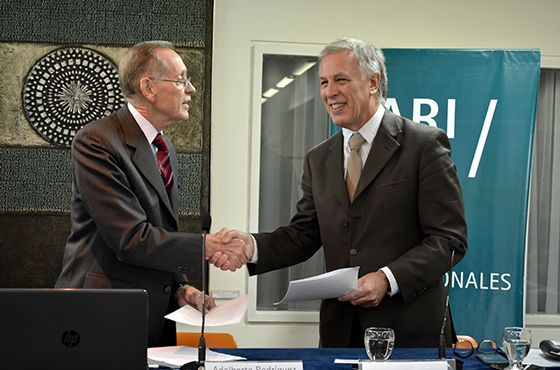 In an enriching and productive seminar, dozens of policy makers gathered together to discuss the future of Argentina in implementing the globally-adopted Sustainable Development Goals, devised in 2015 via the United Nations with the aim of providing an effective, adaptable, global framework to secure environmental sustainability, economic development, and poverty eradication.

To open the morning’s session, CARI president Adalberto Rodriguez Giavarini and Luis di Pietro, National Director of the SDG Project, emphasised the important ability of these frameworks to maximise the potential of Argentine cities, in order to effectively meet these goals. While SDGs both deepen and broaden mechanisms for poverty eradication, improved transportation, enhanced infrastructure, reduced crime, financial opportunity, clean and sustainable energy, and greater international transparency, cities provide concentrated focal points to maximise their positive effects. As Mr. Giavarini noted, cities hold 90% of Argentina’s population, and are the economic engines for the country. Any kind of domestic or international development stems from the political negotiations that take place in cities, and this effect is even more amplified further inland. Municipalities, in addition, provide gateways for subnational changes, allowing us to mold abstract objectives into policies conforming to our local agendas.

To set the tone for the following discussions, Mr. di Pietro highlighted the broader objectives of these policies is to "make makers". No matter how hard governments try, and how effective we can be, it is unfortunately impossible for any singular administration to make permanent, lifelong impacts for every single citizen, and every single home. By meeting some of these commitments in the near future, we hope to provide institutional pathways, so that citizens can adopt the constructive mentality behind these goals, and internalize their vision for the country in a social, economic, environmental, and holistic manner looking forward to 2030.

The first panel focused on cities’ strategies for urban cooperation, striving to meet their SDGs by 2030. It featured the insights of Mr. di Pietro, Gabriel Bottino (Coordinator for Argentina in the United Nations Development Programme), Jessica Braver (Resident Coordination Officer for the UNDP), and was moderated by Ignacio Tonelli (Interjurisdictional Affairs Coordinator for the 3 de Febrero Municipality). As explained by both UNDP representatives, SDGs provide a formal, institutionalized lenses to delineate and accomplish national goals. However, their most worthwhile purpose involves providing tools for gathering empirical data, as well as prioritising each objective with equal intensity. In Argentina, this means deepening some of the basic tenets of human rights for the nation in its totality: reducing teenage pregnancy, improving basic living conditions, increasing transportation and infrastructure investments (especially for disabled citizens), and promoting greater cultural participation. The role of municipal and superintendent offices in collaborating with cities is thus crucial; they are responsible for allocating human and financial resources to meet these goals. Superintendents also ensure ambitious –though attainable– targets according to their available budgets and resources. As maintained by all panelists, the quantitative nature of the agenda, and its requirements for consistent and detailed progress reports are crucial drivers to the accountable, transparent reinforcing of seemingly abstract policies. Quantifying success also helps align existing development projects with goals similar to that of SDGs within an international context.

We have to humanize and approximate SDGs to the neighbourhoods, localizing their experiences with public policy as much as possible

The second panel discussed specific examples of cities that have effectively localised the broader SDG objectives, led by David Groismann (Strategic Director for the city of Buenos Aires), Sergio Barrios (Director of International Relations in Rosario), Noelia Wayar (Director Institutional Relations for the city of Córdoba) and Héctor Dastoli (Budget Management Directors for the city of Córdoba), Evangelina Colli and Juan Manuel Paredes (representing the Salta International Cooperation Directive), and Simón González (Director of Investment and Exterior Commerce for Santa Fé). Mr. Groismann detailed Buenos Aires’ approach to handling the SDGs via their three-pronged strategy: adapting curriculums to develop baseline technical indicators; sensitizing agendas by communicating policies through the language of the SDGs; and positioning policies to develop foreign relations with other nations following similar goals for external expansion. In Córdoba, the biggest forward steps involved the simple mentioning of the SDGs when creating public policy, creating consciousness around them. For more remote cities, working to enhance recent trends of decentralisation ensures less national political dependence on enormous epicentres the size of Buenos Aires. Especially in medium-sized cities, it is becoming increasingly clear that, when contextualizing problem-solving within the SDGs, it is just as important to consider cities and municipalities in their totality, as opposed to solving individual issues. In Salta and Rosario, increased financial sustainability has grown, mostly through partnerships between public and private sectors. Especially in lower-income communities, conversations surrounding gender equality and childhood development programmes have become increasingly salient. In these rural communities, climate change is a pressing and universal threat; being able to quantify its impacts through SDG policy is not only a helpful baseline tool, but it will help measure the effectiveness of future policies. Perhaps the most important issue discussed by these leaders, however, was the need for equitable and universal financing in all communities, not just in major and heavily-populated centres of society. Often the cities lacking the most financial resources are those most highly dependent on effective solutions, in order to solve the most basic problems for their citizens.

The SDGs have vigirously incentivised us to adopt technologies we knew we needed, but never managed to truly incorporate into our agendas

The last panel examined implementation of the SDGs in midsize cities. Represented were General Alvear (by Pablo Reyes and José Vilnez, both members of the municipal government), Junín (by their Director of International Relations, Celeste Casella), and Tandil (by Alejandra Marrieri, Social Development Secretary). General Alvear, the smallest of these cities, has a population of approximately 50.000 people. Their main projects focused on targeting the objectives of the "Argentina 2030" plan, concentrating especially on poverty and health indexes. For the city, the combining these sectors yielded major improvements in basic sanitation infrastructure, namely by duplicating the population with access to public sewage systems. A predominantly rural city, General Paz also suffers immediate effects of climate change; rising temperatures and decreased snowfall continually reduces the amount of water flowing through their only river, shared with the province of La Pampa. New aqueducts and transport railways hope to enhance economic flourishment in the near future. Significant public funds have also been allocated to state-sponsored programmes targeting childhood obesity, adult education opportunities, vocational training for intellectually and physically disabled citizens, and economic stipends for victims of physical abuse, since pursuing legal action is often hindered by their economic dependence on others.

The city of Junin places the greatest importance on embedding numerical practices into the many broader objectives established by governments, especially in terms of day-to-day government operations. Tandil’s philosophical approach is centred on finding the best possible ways to humanize and approximate SDGs to the neighbourhoods, localizing their experiences with public policy as much as possible. They have worked with the local public university Universidad Nacional del Centro to promote specific pathways for this to occur. According to their representative, Alejandra Marrieri, there is a "real city", with its current assets and shortcomings, an "ideal city", which is the local version of a utopia, and an intermediate "possible city" that maximizes our assets in order to create long lasting improvements in our quality of life. This is our goal, the possible city.

The two most salient themes from these panels described both the greatest benefit and the greatest drawback for governments reconceptualizing public policy within the context of the SDGs. The most notable improvement, noted by virtually all panelists, has been the incorporation and prioritization of statistical analysis. Ranging from poverty indicators to future infrastructural projections, Celeste Casella remarked that the SDGs have vigirously incentivised us to adopt technologies we knew we needed, but never managed to truly incorporate into our agendas. On the other hand, however, the SDGs also present a major challenge. Since they often heavily overlap with preexisting development goals, Mr. Groismann noted that for precisely this reason, in his experience local governments often try to appropriate this international framework as their own, claiming their administrations succeeded without the collaboration of the UN.

Overall, the three panels shed light on the immense productivity that is underway across cities and municipalities all over Argentina, to build a better future. Governments seem very much in tune with, and cognizant of, the challenges and obstacles Argentina must overcome in order to secure a prosperous future that is absolutely within reach. Reliance on politics devised by the international system help secure effective implementation, transparency, accountability, efficiency, and communication at every level, all drivers for long term success.