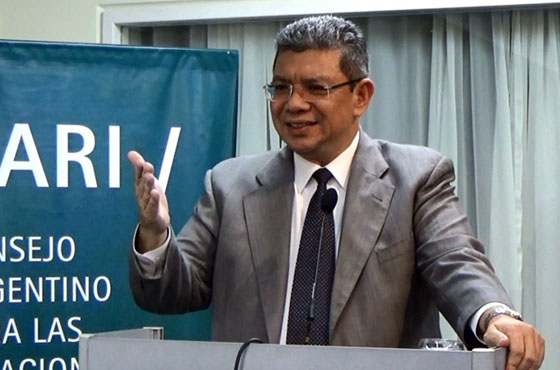 The new administration bases itself on four principles: democratization, freedom, human rights, and rule of law

The session was opened by Adalberto Rodríguez Giavarini, President of the Argentine Council for International Relations (CARI). After thanking the valuable presence of His Excellency Dato 'Saifuddin and the support of Ambassador Mario Schuff, Director of the ASEAN Working Group, and Ambassador Dato Mohd Khalid Abbasi Abdul Razak, Rodríguez Giavarini talked about the history of the bilateral relations between Malaysia and Argentina. These relations can be traced back to 1967, and have enjoyed a cordial and warm endurance since then. In this sense, CARI´s President affirmed that "Nowadays, Argentina is one of the three biggest strategic partners of Malaysia in Latin America".

Malaysia’s Foreign Affairs Minister began his presentation by thanking CARI for the organization of the event. He then referred to the recent general elections in Malaysia, held on May 9th 2018, where the former Prime Minister, Mahathir bin Mohamad, member of the Alliance of Hope party, was elected. He stated that for many Malaysians, it felt like a second independence, and therefore, he coined the term a "Neo-Malaysia". H.E. Dato 'Saifuddin Abdullah asserted that the new administration bases itself on four principles: democratization, freedom, human rights, and rule of law. As examples of the ongoing reforms, he pointed out how the Parliament is now shifting to a more people-oriented institution; and he also mentioned a judiciary reform that includes the creation of a Royal Commission for the investigation of corruption and foul play among the judiciary.

As the session continued, H.E. Dato' Saifuddin Abdullah highlighted the new attitude of Malaysia in the global sphere. "We want to be friendly with all States and we want to do business with all States. We want to promote free and fair trade". Some of the challenges Malaysia faces on this sphere, he claims, are in fact challenges for the world as a whole. This includes a democratic retreat in many countries around the world; the current terms of globalization; and the reemergence of protectionism. However, he considered that given the global shift from the West to the East, from the Atlantic region to the Pacific region, "Malaysia -together with its ASEAN brothers and sisters, and friends around the world- has to be steadfast and further the cause for democracy, globalization and free and fair trade".

Regarding Malaysia’s foreign policy, H.E. Dato 'Saifuddin Abdullah stressed that the New Malaysia will give continuity to its cardinal principles: remaining close to the ASEAN; building friendly relations with all countries; respect the principle of non-interference; and a more important role in international organizations. Nonetheless, he stated that the new Malaysian administration will pursue certain changes. For instance, bringing the ASEAN closer to a single economic market in terms of population; taking a more proactive approach within international organizations such as the UN; defending Muslim minorities around the world; tackling terrorism and islamophobia and finally, building a bridge between the western conception of democracy and the Eastern and the Muslim world approach of it.

The Minister of Foreign Affairs of Malaysia ended his speech pointing out that "We want to tell the world that yes, we are a new, emerging democracy, but we are a multiracial and multireligious country. We are democrats. We uphold the rule of law. We believe in integrity, transparency, accountability. We want to be part of this world that is progressing forward for the betterment of the whole society".

Ministry of Foreign Affairs of Malaysia