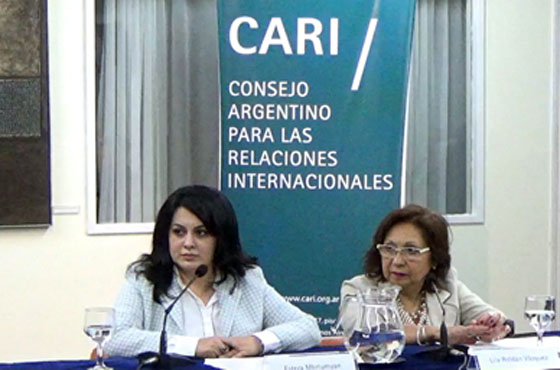 Academic session conducted by Estera Mkrtumyan, Ambassador Extraordinary and Plenipotentiary of the Republic of Armenia to the Argentine Republic, with concurrent accreditation to Uruguay, Chile, and Peru. Presentation and introduction in charge of Ambassador Lila Roldán Vázquez, coordinator of the Contemporary Eurasian Studies Working Group

Firstly, Ambassador Mkrtumyan began by thanking CARI and, especially, Ambassador Roldán Vázquez, for the kind invitation to present the Republic of Armenia as a gateway for Eurasia. Then, she stressed the need to first understand the historical and geopolitical background of Armenia, essential when analyzing the role of the country today.

The history of Armenia goes back to the 2nd millennium BC, and for more than 2500 years an Armenian identity and language has been a common topic, as a heritage still present that maintains unbreakable bonds between today´s Armenian Republic and the Old Armenia. Regarding the geographical position - of small extension, without access to the sea, and on the border between Europe and Asia - Armenia has always been a meeting point between European and Asian cultures.

"History, culture, affinities, protagonism, the closeness of the Armenian relations with the peoples of the West and the former Soviet Union; all these factors determine a remarkable versatility of the leadership and entrepreneurship of Armenia, Eurasia and the West, to make Armenia a frank and agile gateway to tighten the relations of the world with Eurasia and its gigantic market".

Secondly, the speaker commented on the current panorama of Armenia and its economic relationship with the world, closely linked to the Eurasian Economic Union (EEU). This union, established in 2014, has the development and economic integration of its member states as its main goal, as well as the increase of foreign trade between the EEU and the rest of the world. Since January 1st, 2019, Armenia chairs the organization of the EEU. The Ambassador emphasized the importance of the Memorandum of Economic and Commercial Cooperation signed in Montevideo on December 17th, 2018 between MERCOSUR and the EEU.

Similarly, she stressed the comprehensive partnership agreement that Armenia has with the European Union, which gives it a privileged position in the foreign trade of that bloc. In this way, the Republic of Armenia plays a central role in encouraging trade between the EU and the EEU. Likewise, agreements of economic and commercial cooperation with countries such as China and Iran, a free trade agreement with Vietnam, and current negotiations with Singapore, Serbia, Egypt, Israel and India are, according to the Ambassador, a sign of the total commitment of Armenia and the EEU to increase the integration and foreign trade of member countries with third countries, as well as their position in the global economy.

Embassy of Armenia in Argentina

Chronicle: "Cycle on the countries of the Caucasus region", August 20th, 2014

Series of Articles and Testimonies: "The normalization process between Turkey and Armenia", by Ricardo Torres

Series of Articles and Testimonies: "The presidential elections in Armenia", by Miguel Cúneo