Argentine-Chinese Strategic Partnership. Companies, investments and vision of the future 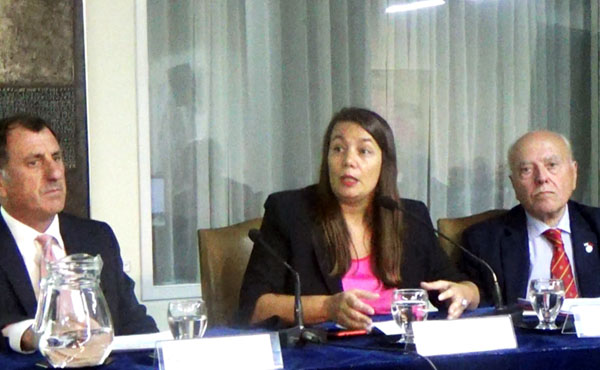 The academic session was opened by Eduardo Sadous, who warned the presents about the significant changes facing the international community today, highlighting the role of China as a global power. This phenomenon, he expressed, seems clear when looking at the various projects that the Asian giant has established across the globe. Among them, relevant are the numerous energy and mining initiatives, the strong presence of its products in supermarkets worldwide, and the recent and prominent initiative "One Belt, One Road". He, then, pointed out that it is necessary to understand the ways in which the Asian Giant interacts and, in particular, to continue strengthening the strategic relationship between Argentina and the People's Republic of China.

General Julio Hang stated that the meeting’s aim was to consider the alliance with China as a strategic element of vital importance. Firstly, he highlighted the creation of Spanish courses offered in Chinese universities and the number of specialists in international relations devoted to knowledge of Latin America and the Caribbean; being this a poorly developed field of study before.

He also mentioned four phases of China's development. The first one has to do with education, the second one with the economy, the third one with scientific and technological development, and the last phase refers to military development. This last has to do with the international space station, which is only supplied by Chinese vehicles; supersonic aircraft such as the J-20; the participation in all the weapons systems and the cyber-strategy they use, in addition to the modern base established in Antarctica, among other activities.

Next, Dr. Félix Peña talked about the current role of the People's Republic of China in international issues. In this regard, he mentioned the Meeting of the European Council last 21 and 22 of March this year, in which the EU and China agreed to hold the Summit of April the 9. He, then, highlighted the evident relevance of China in any strategic analysis.

China is an excellent investor, beyond the cultural challenges

Later, the moderator, Carola Ramón Berjano, went into the question of the role of Chinese companies in the country. As the first aspect to be considered, she pointed out the need of knowing and understanding in depth the People's Republic of China. She then gave the floor to Ernesto Fernández Taboada, Executive Director of the Argentine-Chinese Chamber of Production, Industry and Commerce.

The first issue mentioned by the speaker was the Official Document published by the Chinese Government in 2008, called "Document on Latin America and the Caribbean", which urged Chinese entities to get themselves involved in the region’s all aspects of human life (culture, commerce, etc.).

He later pointed out the existence, within the last two years, of a large deficit in our trade balance with China. Like Ambassador Sadous, he stressed that part of the responsibility rests with the Argentine business community. He acknowledged that although 90% of the sector is made up of SMEs, the importance of making an opening effort to take advantage of the enormous potential offered by China is fundamental.

Regarding the presence of Argentina in China, a wide range of products that are currently exported, were presented. He affirmed that soy and wine are not the only components, since beef, pharmaceutical products, and pet food, among others, has also entered into this global power. Among the Argentine companies, the presence of food and genetic and pharmaceutical engineering stands out. In addition, he made special emphasis on the case of Indelval, which succeeded in exporting non-directional rubber floors, mostly used in hospitals, and which is in a better position than other European companies of the field. He also underlined the role of INPROTUR in the promotion of tourism to our country in Chinese propaganda. In this line, he highlighted the opening of a window of opportunities, starting from the third reduction of import rights that the Chinese Government made last January.

He continued his speech by detailing a long list of Chinese companies with presence in all areas of the society. In the financial sector, he mentioned the activities of ICBC and the China Development Bank, which agreed with the Argentine authorities the financing of $ 280 million for the renovation works of the ROCA railway line. In telecommunications, he highlighted the presence of HUAWEI and ZT, both providers of telephone exchanges. In the energy sector, he highlighted the existence of China National Offshore Oil Company and JHP, among others. He also highlighted the strong Chinese presence in various productive sectors, in most of the Argentine provinces; from Jujuy, where China Tobacco International Company has promised to make a tobacco processing plant, to Tierra del Fuego, where currently, the presence of the Asian country has contributed substantially to the generation of new jobs in the field of electronics.

In addition to the investments, Fernandez Taboada highlighted the importance of the Chinese and Argentine cities’ twinning, as a result of the development of a favorable climate for business and cultural exchange.

The last speaker was Pablo Pérez Marexiano, current Director of Corporate Banking at ICBC. In the first place, he talked about the great challenge that meant for both Chinese banks and Argentine banks, the adaptation to the business environment in Argentina and the understanding of the cultural changes that both countries represent. As a representative of ICBC, he stated that it is currently the largest bank and company in the world. He argued that "it has assets of more than 4 billion dollars, almost half a million employees, 17 thousand branches and approximately 560 million customers". Regarding its size in the country, he commented that there are 117 branches, one million customers, 3,600 people, assets of 184 billion, and 46,000 SMEs. "It's a bank of the big medians", he said.

Finally, the speaker observed that the ICBC has demonstrated the willingness to actively invest beyond the economic problems of the country. From his experience, he qualifies the Asian giant "as an excellent investor, beyond the cultural challenges" and beyond what it means to adapt to a new way of doing business, highlighting the strong commitment of the investor country.